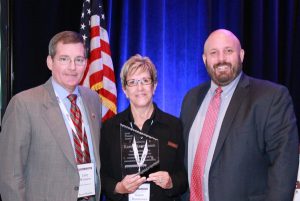 When the Pioneer Award was established in 2006, the goal was to recognize distinguished members of the trucking profession who had contributed to the industry, the association and their communities. Originally meant to serve as a one-time award in keeping with the 2006 conference theme – “Today’s Pioneers, Tomorrow’s Frontiers” – the awards proved so popular that the Board of Directors decided a year later to make them permanent but to award them only when individuals truly merited recognition for their industry service. The Pioneer Award has not been awarded since 2012.

Karen Rasmussen’s lifelong commitment to the trucking industry and her passion for truck safety began when she took a job working for the Oklahoma Highway Patrol and Department of Public Safety. While serving in a public relations role, she had an opportunity to work with the Oklahoma Trucking Association, where she developed a deep appreciation for the trucking industry’s safety focus.

In 1997, Rasmussen was hired as Director of Government Relations for Ryder System, Inc. There she was instrumental in leading the company’s advocacy efforts in 46 states and on Capitol Hill.

In 2001, after the sudden death of AMTA Managing Director, Terry Smalley, AMTA rallied to hire Karen as his replacement.

A common statement to describe Karen’s tenure as President and CEO for the Arizona Trucking Association is that “she brought the Association to a whole new level.”

While her accomplishments are too numerous to list, there is little doubt she left her mark on the Arizona Trucking Association. During her time as President and CEO, she established a budgeting and benchmarking process for the association; under her leadership, ATA’s membership doubled and the association built the new ATA headquarters in west Phoenix; she led the charge on passing the anti-indemnification legislation; she re-established the Safety and Maintenance Council; she established the Arizona Transportation Education foundation; and spearheaded the ‘Teens and Trucks’ video that is widely used by CVSA members, including several Canadian provinces.

“I believe that Karen Rasmussen is a good candidate for the Pioneer Award,” said Mike Jimenez, J&L Transport and former ATA chairman. “Her lifelong commitment to the industry and the advancement of our association makes her deserving, in my humble opinion.”

Past recipients of the Pioneer Award are as follows:

Dear ATA Members: Please see the memo below from the Arizona Department of Transportation about…