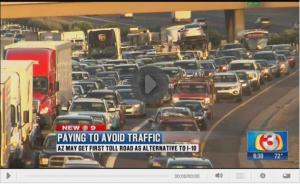 No one likes to sit in traffic, but would you be willing to pay to avoid it? Well, you might get that chance. The Arizona Department of Transportation is looking at the possibility of a toll road in metro Phoenix.

It is a common complaint among drivers who commute to or from the West Valley on Interstate 10. During rush hour, the freeway becomes congested.

“We need an alternative,” driver Doug Cunningham. “I-10 — as you know, I’ve lived here my whole life — is overcrowded so we need to have some other way of getting traffic around.”

There is an alternative; it just has not been built yet. It’s called State Route 30.

The proposed six-lane freeway would go in south of I-10 and run parallel to it from the Loop 303 to the new 202 South Mountain Freeway. Right now, there are still several possible alignments under consideration.

State Route 30, while on the Maricopa Association of Governments (MAG) long-term Regional Transportation Plan, is on the back burner, lacking a start date and secured funding.

ADOT, in an effort to speed the project along and help fund it, is studying the possibility of making it a toll road, which would be a first in Arizona.

See the entire story at AZFamily.com

Robert Robb: Arizona Gov. Doug Ducey will claim that the new per-vehicle assessment is a…