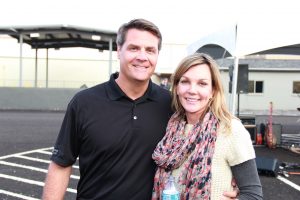 Collin and his wife Laura

1995 was an important year for Collin Stewart. First, he got a new dog. Then he got married. After that, he and his wife Laura bought a house. Finally, on November 22nd, to be exact, Collin started Stewart Transport. A risky and exciting year, it’s clear that Collin sees 1995 as a defining milestone in his life. With three children, a happy marriage and 101 power units and 130 trailers in the Stewart Transport fleet, which specializes in hauling refrigerated goods for the food distribution network, the decisions taken in 1995 certainly seem to have paid off.

“It was definitely a leap of faith. We’d just gotten married, my wife and I didn’t have any kids at the time, but I knew I wanted to start my own business and fortunately, I’m still making a living out of it today,” said Collin.

Despite the characteristic understatement, Collin is certainly true in what he says. The company that he built from the ground up now provides a living to over 135 employees, and he intends to keep growing. While he is adamant that he doesn’t need thousand’s of trucks to be successful or happy, he does intend to grow by 10% – 15% a year, a goal he thinks is certainly possible. “I think that’s a sustainable goal. A reachable goal. But it’s really important to me that we don’t lose sight of the quality of the product and the quality of the environment that we have here,” he said. “To me the environment is very important; the working environment for our staff and the equipment for our drivers. My goal is to be happy and to live life to the fullest. I’ve got three children and a wonderful wife and I’m very proud of that. I want to be able to have time to spend with my family and to enjoy that, and I want that for my staff too. That’s very important.” 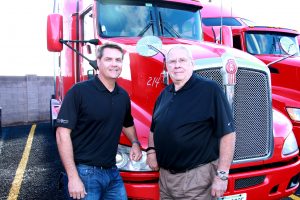 Collin and his father Richard

Clearly the health and happiness of those who work with him are important to Collin and he understands their part in the success of Stewart Transport. “No one person can run a company. There needs to be a group of people who work well together, and we have that at Stewart Transport. I really enjoy watching the team function and execute on a daily basis.”

Despite the growth and success of Stewart Transport, had the stars been aligned a little differently, the business may never have come into being at all. Unlike many owners of trucking companies, Collin did not grow up in the industry. Growing up in Iowa he spent his childhood on a farm rather than elbow deep in engines. “I was born and raised in a small farming community in Iowa. I was exposed to heavy equipment at an early age, which is likely why I was not intimidated by trucks.”

After high school in Iowa, Collin moved across the country to attend Arizona State University, graduating with the class of ’92. “I joke about being broke after college, that I didn’t have enough to buy a farm but I could scrape together enough money to make a down payment on my truck.”

After purchasing his first truck, a 1995 Volvo, he had bought another three by the end of the year, thanks, in part, to the Arizona Trucking Association. “The ATA had put together a truck show at the South Mountain Resort so I went down to see what it was all about. I didn’t know anything about the association at the time. I was jumping in and out of all the trucks, trying to get a feel for the sort of truck I wanted.” Having found the truck he wanted, Collin later purchased one from a local dealer. 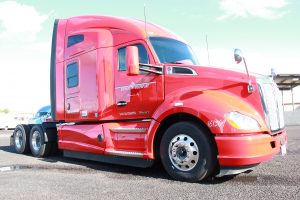 After this formative experience with the ATA, Collin’s engagement in the association continued. In fact, a highlight of his career is having served on the association’s board chairman. “In the chairs you serve a two-year term as treasurer, vice-chair, and as chairman,” he said. “And going through the chairs was a very proud moment. Proud to represent trucking and transportation in the state of Arizona. We did this on a national level as well, visiting our delegates in Congress in Washington D.C.”

He continued; “It’s a shame that more trucking companies don’t join because there are so many positives that you can gain from the association that is looking after the best interests of your organization, and your business, and your lifestyle. They’re there to protect you against harmful legislation, and they’re there to promote safety. The ATA is a very important part of our industry.”

Collin wants Stewart Transport to be involved in roles of social responsibility. For that reason, Stewart Transport is partnered with Truckers Against Trafficking, a non-profit organization intended to stamp out human-trafficking in the United States. They recognize the unique position that truckers have as the ‘eyes and ears of our nation’s highways’. “As many carriers have said”, he explained, “if we can put this effort in to stop one person from being a victim then that’s a win. Drivers see things out on the road but they don’t know what to do or they don’t know who to call. So this is our opportunity to get ahead and do something productive and positive with the resources that we have.”

Even after 20 years in the trucking industry, Collin has no intentions to walk away from it yet. He credits everybody involved in trucking in Arizona for how welcoming a place the Arizona trucking industry is to work in. Even though each company is essentially a competitor, there is a shared camaraderie that is not often found in other sectors of business. “It is staff and colleagues in the industry who have helped me be better at what I do,” he said. ”They’ve helped me better educate myself on better ways to operate the business and those colleagues are often friendly competitors. It’s amazing to walk into a room where potentially every other trucking company is a competitor, yet we’re all socializing and enjoying our time together.”

At the bottom of this is the reason that each company owner entered into the business in the first place. “We’re sharing ideas and understanding that we’re all there for the same common goal. And that’s to provide jobs, provide a living for our employees and provide a quality service for our customers. But most importantly, to do it safely and to keep the highways safe.”

Mike Nesbitt, President and Owner of Jonesco Trucking, has been a Head Athletic Trainer, an…