Harrisburg, Pennsylvania – Today, leaders with the American Trucking Associations joined President Trump in calling on Congress to quickly act on comprehensive tax reform as a way of growing the economy and creating jobs. 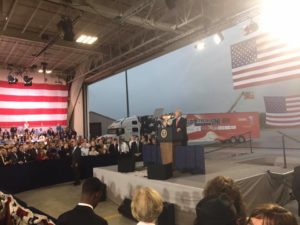 “While trucking sustains the vitality of the U.S. economy, we also carry a heavy tax burden, paying the highest corporate tax rate of any transportation mode,” said ATA President and CEO Chris Spear. “That is why we joined President Trump at today’s event, in support of his plan to reform our tax code. We urge Congress to follow the President’s lead and pass tax reform by year’s end.

“Hearing the President specifically call out the benefits of tax reform for ATA’s members and the trucking industry underscores the need for this effort. We urge Congress to work with the President to achieve the goal of reducing the rates families and small businesses pay in taxes,” he said.

Spear was joined at the event in Harrisburg, Pennsylvania, by several ATA members, in support of the tax reform effort.

“Few industries are as connected to every facet of the American economy as trucking. From that vantage point, we can see clearly what the President’s tax reform plan would do to drive our economy,” said ATA Chairman Kevin Burch, president of Jet Express Inc., Dayton, Ohio. “Every day, we proudly do our job to move America forward. We join the President in calling on Congress to do the same.

“Lower rates equals money that can be used to hire and pay drivers – the top job in 29 states. It can be used to purchase new, safer equipment, or hire highly skilled technicians to maintain it,” Spear said. “By easing the tax burden on the truckers that literally move our economy, Congress will enable us to invest in our employees, equipment and the growth of our companies. Higher tax rates mean higher transportation costs, which make everyday goods more expensive – hurting lower-income Americans the most. By contrast, the benefits of lowered rates will reverberate up and down the supply chain, from the manufacturer to the small business and individual household.”

“Passing tax reform would help me as the owner of a small family-owned business, by not only helping us add drivers and trucks, but in allowing this business to stay in my family by eliminating the estate tax,” said ATA member Calvin Ewell, president of H.R. Ewell Inc., East Earl, Pennsylvania. “Trucking is a low-single-digit-margin business, and family-owned companies aren’t flush with cash, but they have millions in capital tied up in trucks and facilities, so eliminating this tax will preserve our small family trucking businesses as a small family business.”

American Trucking Associations is the largest national trade association for the trucking industry. Through a federation of 50 affiliated state trucking associations and industry-related conferences and councils, ATA is the voice of the industry America depends on most to move our nation’s freight.

ATA Commends the Passage and Signing of House Bill 2173

Legislation allows commercial drivers to renew their CDL every eight years instead of five Tolleson,…

DOT Issues Update on Significant Rulemakings On September 15, 2015, the Department of Transportation (DOT)…