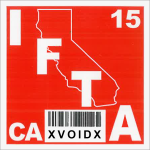 A number of states have a variable component to their fuel taxes, typically designated either as a sales tax on fuel or as a part of the fuel tax itself, tied to fuel price or some other index. For purposes of the International Fuel Tax Agreement, states that have varying rates may change them no more frequently than quarterly. California, which has a large sales tax component embedded in its fuel tax, only adjusts its IFTA rate on diesel – that is, the per-gallon rate it charges per gallon on underpurchases or allows as a per-gallon credit on overpurchases in the state — once a year, to reflect changes in prices in the interim since the last adjustment. Since this is done only once every twelve months, the adjustment can sometimes be quite considerable. And so it will be in 2018, when the California’s IFTA rate on diesel (the state does not require gasoline to be reported for IFTA) will jump from 57 cents a gallon to 70 cents on July 1, two weeks off. We don’t usually report adjustments in IFTA rates in the SLN before they take effect, but this change in California is so large, and affects so many trucking companies, that we’ve made an exception for it. Other changes in tax rates for the third quarter will be published in our quarterly fuel tax rate chart early in September.

You are invited to join in this event and honor those who served our country.…

On Thursday, the attached updated American Trucking Asssociations-led coalition letter was communicated to House and…