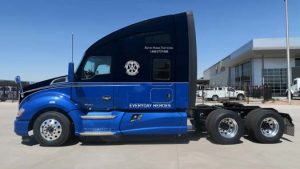 TOLLESON, Ariz. – In an effort to further educate and fund efforts against human trafficking, Inland Kenworth has put together a special “Everyday Heroes” Kenworth T680 with a very distinctive paint scheme and signage. The project, which is in conjunction with Truckers Against Trafficking (TAT), has received significant support from platinum sponsors Kenworth Truck Company and Ritchie Bros., along with other leading industry suppliers.

The Kenworth T680 Everyday Heroes truck will make its first public appearance at ATA’s Technology and Maintenance Council Convention in Nashville (Feb. 27-March 2) in the FlowBelow™ Booth (No. 1052). From there, it will be displayed at Ritchie Bros. auctions in Las Vegas (March 9-10), Phoenix (April 13-14), and finally June 20 in Phoenix, where the truck will be auctioned for sale.

Proceeds from the sale of the T680, which has a retail value of $157,000, will go directly to Truckers Against Trafficking – a 501(c)3 non-profit devoted to stopping human trafficking by educating, mobilizing, and empowering the nation’s truck drivers and rest stop employees. At the center of TAT’s battle against human trafficking is the education of truckers and truck stop operators about what to look for and how to respond.

“This project has mobilized a group of caring industry suppliers, and together we are going to help save some lives,” said Don Blake, who spearheaded the effort and serves as Inland Kenworth’s new truck sales manager in the Phoenix area. Blake came up with the idea after a TAT presentation. “I had to wipe the tears from my eyes after learning the horrors that TAT rescues people from today. I knew right then that I wanted to help our industry combat human trafficking.” With the support of Inland Kenworth and Kenworth Truck Company, we decided to build a special truck with the idea of having the cost offset by Kenworth and component sponsors. The response was nothing short of unbelievable,” he said.

According to Blake, sponsor levels from $25,000 to $2,500 helped build the truck. The special Kenworth T680 is fully loaded with a 76-inch sleeper, 485-hp PACCAR MX-13 engine, and Eaton® Fuller Advantage™ 10-speed automated transmission.

“The outpouring of support for this effort is phenomenal. All the main component suppliers with a product on this truck were incredibly eager to provide their support to the project. We even had a trailer dealer – Utility Trailer Sales Company of Arizona – donate and offer to host training,” said Blake. “We will all share in the success of the program when the truck is auctioned off. The owner will have a very special truck, and will know that they helped support a very worthy cause. We truly hope there will be a bidding war on the Everyday Heroes truck. That way we can raise even more money,” said Blake.

“This is a wonderful project that was put together by Don Blake and the Inland Kenworth dealer family. We wanted to be supportive and help make Don’s vision a reality. It’s inspiring,” said Kurt Swihart, Kenworth marketing director.

“I can’t tell you how excited we are at TAT to be involved with Don and his group,” added Kendis Paris, TAT executive director. “When I met Don, he came up to me and said ‘we have to do something for the kids – we need to figure out a way to support the program.’ He was so sincere and driven. He then contacted me with the idea of an Everyday Heroes truck, and told me about the support he had received from Kenworth and others. It was truly inspiring and shows the trucking industry is committed to making a difference.”

According to Paris, truckers are truly making a difference. Human trafficking is an industry that is estimated to be worth $32 billion in the United States alone – $150 billion globally. “As TAT grows, we’re training and educating more truck drivers and truck stop operators – nearly 300,000 to date,” she said. “They are our eyes and ears and they’re reporting suspicious activity.”

To further its education, TAT has the Freedom Driver’s Project – a mobile exhibit, which educates members of the trucking industry. “Thanks to TAT, we’re educating more drivers every year and they know how to identify and report suspicious activity and are calling 911 and their local sheriff’s department to report the activity,” said Paris. “And, many are calling the national hotline – nearly 1,600 calls have been reported by truckers alone since the program began in 2009. Of that number, we had 503 likely human trafficking cases identified involving nearly 1,100 victims, of which 299 were minors.”

Providing support for the Everyday Heroes Kenworth T680 are:

About Kenworth
Kenworth is The Driver’s Truck. See what drivers are saying at www.kenworth.com/drivers.

Kenworth Truck Company is the manufacturer of The World’s Best® heavy and medium duty trucks. Kenworth’s Internet home page is at www.kenworth.com. Kenworth is a PACCAR company.

The IRS has released the inflation-adjusted limits for HSAs and HDHPs for 2018. These limits…

Phoenix, AZ – The Arizona Trucking Association would like to congratulate the winners of this…