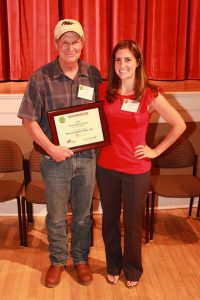 Precision Heavy Haul is a specialist in transporting oversized, overweight and difficult loads. If Mike Poppe, founder and owner of the company was ever content with life’s easy offerings, he wouldn’t have got into trucking.

But for a young man who spent summers working for his father, busting tires, servicing equipment and operating loaders, there was only one industry that appealed. He’d grown up around the oil, sweat and steel of trucking, and that was where he wanted to stay.

In the early years, however, he was not always so sure of his place in the industry. “At the age of 15, I started driving trucks,” said Mike. “I thought I wanted to be a diesel mechanic, so I went to UTI, and while I was there I found out I wanted the best of both worlds.”

This discovery brought about Mike’s decision to build his own company. In 1984, after the purchase of a single 1967 Kenworth and a lowboy, Precision Heavy Haul was born. “I started my company because I wanted the best for my family and knew I had the drive and knowledge to create a business.”

From humble beginnings, Precision Heavy Haul would grow to become one of the most respected and well-known hauling companies in the country. Indeed, as a three-time winner of Specialized Carriers & Rigging Association’s Hauling Job of the Year, PHH can be said to be known around the world.

As you’d expect, these awards were not won on the back of ordinary hauling jobs, but from the successful completion of intricately detailed and exacting projects. As Mike noted, “We have a great team and we can build trailers or make unthinkable projects come to life.”

In 2003, PHH hauled a $10 million telescope mirror to the top of the 10,500 ft. Mount Graham in south-eastern Arizona. At the time, the LBT telescope was the largest in the world. After 29 miles of 1930’s built mountain trails, with over 500 curves and switchbacks, Mike Poppe and his team delivered their package without incident.

Again in 2004, PHH defied odds by hauling components of the Arizona Cardinal’s stadium, including major parts of its retractable roof, for a total of 427 loaded miles. Every second of the job’s 800-plus work hours was painstakingly arranged and planned for. 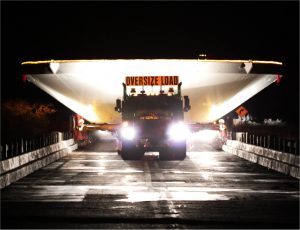 And most recently in 2013, PHH won the SC&RA Hauling Job of the Year for their safe transportation of the Kitt Peak Radio Antenna. The combined gross weight of this $14 million monster tipped the scales at over a million pounds, with dimensions that required many hours of planning the physical clearances, which were set to be extremely tight from the beginning of the route to the top of the 7,000ft Kitt Peak.

Though awards such as these are memorable highlights of Mike’s career, his real enjoyment is in watching the blossoming of the company that he has poured his heart into. Growing a business has been challenging, but it also has provided a wealth of experiences. With a fleet of 16 tractors and over 160 plus trailer combinations, PHH can certainly be said to be a major player in the hauling game. 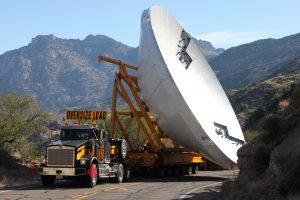 “What I enjoy most is watching the business grow and process through the years, giving me a lot of pride in what we have accomplished. I have had the opportunity to meet and work with some extraordinary people both inside and outside of the company.”

At the core of Precision Heavy Haul is a solid backbone of long-term staff that enjoy a safe and comfortable place to work. Mike credits the family foundation of PHH for the extensive tenure of many of his employees. Mike’s brother, brother-in-law, daughter and step-son all work together to continue the success of PHH, with Mike’s father having retired in 2012 after 20 years of service. The close and caring way that he works with his family has seeped into the company culture of his trucking enterprise. 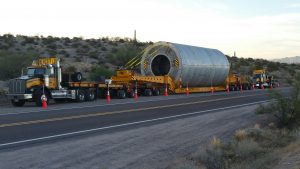 “Family businesses have strong values and care about the business reputation, which is why having family involved is so great. Treating employees with dignity and respect is part of our culture,” he said. “Many employees have been here so long that it feels like an extended family. Every employee is critical in our success, and that definitely influences the services and benefits that we offer. I try to surround myself with positive people who give me the confidence and optimism to keep moving forward.”

To bring businesses into the future always requires a healthy amount of confidence and optimism, regardless of the industry that it operates within. Competition changes and improves over time, costs mount and restrictions, including safety standards, continue to gnaw at the smooth running of an organization. The heavy hauling business, however, is more open to stringent, far-reaching changes in industry standards than most.

“The restrictions are continually becoming more challenging, with environmental and infrastructure requirements, compliance, and regulations for permitting,” said Mike. “When there is no uniformity with the states and municipalities, we are left with the burden of cost for equipment and administrative fees.”

Then there are additional considerations such as the spread of urban infrastructure – overhead obstructions, roundabouts, light rails, a multitude more overpasses – and the simple fact that there are more cars on the road.

These difficulties demand more from those who work in trucking, a factor Mike is certainly aware of. It isn’t always an easy ride; “The least appealing aspects of my position are the economic struggles and the uncertainty that sometimes encompasses owning a business.”

Mike credits the Arizona Trucking Association for keeping Arizona’s trucking companies up-to-date with compliance standards, as well as being a mouthpiece for the truckers in the state. He has been a member for over 25 years and has previously served on the association’s board, giving him intimate knowledge into the work it does.

“The ATA has the tools and resources to enable success in our industry,” he said. “The association enables involvement in the community, gives our industry a voice with legislation, provides compliance and safety knowledge, and allows networking with fellow members. The ATA staff has an overwhelming amount of experience and knowledge; they really go above and beyond for their members.”

Similar feelings are shown towards the Overdimensional Permit Advisory Council (ODPAC), which Mike credits with making a huge impact on the trucking business. Formed in 1993, the council assists the Arizona Department of Transportation in developing rules for the administration of overdimensional permits and has been a vital boon to the industry of overdimensional hauling.

And what about the future? After 33 years of outstanding commitment to his business and the hauling industry generally, Mike hopes to have built a business that his family can rely upon. “My hope is that Precision Heavy Haul, Inc. becomes a legacy for me and my family, and the future generations that continue with the business.”

Arizona Department of Transportation sent this bulletin at 09/21/2016 01:13 PM MST Share your priorities…

U.S. Department of Transportation Takes Action to Assist America’s Truckers in the Efficient and Safe Distribution of COVID-19 Vaccines