ATRI’s analysis draws on data from over 435,000 U.S. truck drivers over a two-year time frame to expose nearly a dozen behaviors that raise a driver’s risk of being involved in a future truck crash by more than 50 percent. 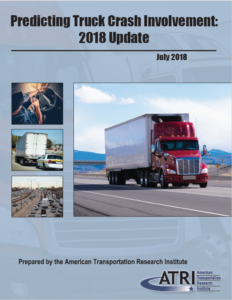 Understanding that traffic enforcement, particularly those activities that target the crash predictor behaviors, is an effective tool for mitigating crashes, ATRI’s research quantifies the “top tier” states which emphasizes those states that have proven track records of maximizing their enforcement resources while minimizing their share of the nation’s truck crashes. Arizona was ranked eight overall in ATRI’s report.

“DPS’ Commercial Vehicle Enforcement Unit is a first class partner when it comes to commercial vehicle safety,” said Arizona Trucking Association President, Tony Bradley. “I am glad to see their enforcement efforts recognized as an effective way to keep everyone safe on our roads and highways.”

Other key findings from ATRI’s Crash Predictor Model Update are:

A copy of this report is available from ATRI at www.truckingresearch.org.

Arizona Department of Transportation sent this bulletin at 09/21/2016 01:13 PM MST Share your priorities…

XPO Logistics driver Ina Daly knows her way around a road skills course. As a…

US 60 east of Superior to close briefly for blasting operations Nov. 17 and 19