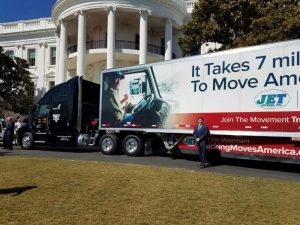 Trucking was front and center at the White House today!

Drivers gave a personal tour to the president as he took a seat inside the cab of a truck in front of the White House.

Later, a round table of trucking company leaders introduced themselves and their company one by one to the president.

The president stated the importance of American companies and his pledge to repair the nation’s infrastructure problems.